ALIENS: WHO and WHAT?

HORRIFIC! ALIENS are sickening creatures. they are not friendly. DO NOT TRY TO BEFRIEND ALIENS. IF YOU THINK YOU HAVE FOUND AN ALIEN, DO THE RIGHT THING AND KILL IT ASAP Aliens only goal is to invade and control the earth They want it for their own and they DONT plan on SHARING ALL FRIENDLINESS FROM AN ALIEN IS FAKE. The goal of every alien is SOLELY invasion and they will do ANTHING to get it They can even be nice but it is not REAL so dont FALL FOR THEIR LIES They want this world for their own. THEY think its THEIR right BUT HUMANS OWN THIS PLANET WE HAVE LIVED HERE FOR YEARS.OUR DUTY IS TO PROTECT OUR PLANET

Aliens are from outer space and they have control over many planets INCLUDING the moon (BASE OF OPERATIONS). They refuse to stop until they have OWNERSHIP over EVERYTHING IN OUR UNIVERSE Are you going to let that happen...

MY VERY OWN ALIEN GUIDE BELOW 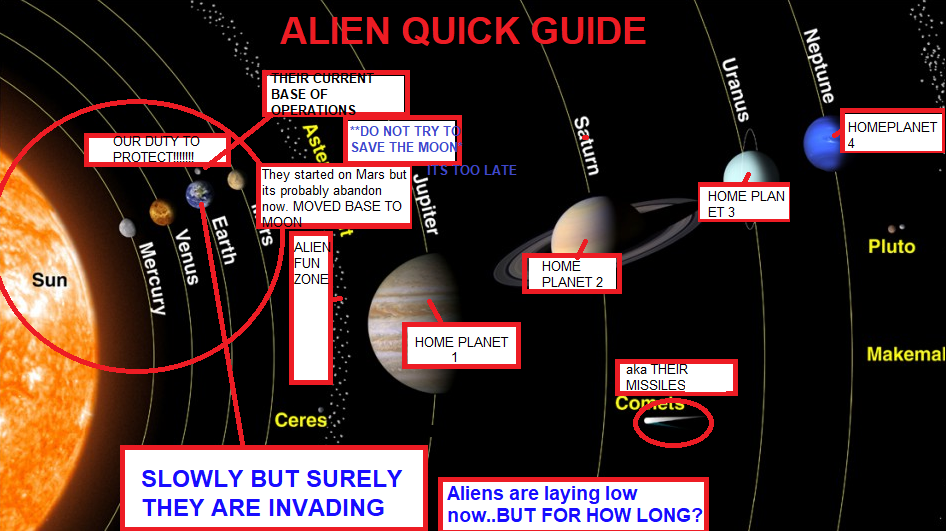 As you can see Aliens aren't from our inner solar system..and everyone wants what they CANT have My theory is that their main goal is the Sun from which they want to HARVEST energy from. Note they do NOT NEED this energy to survive they are just greedy bastards IF we let the aliens reach the Sun they will achieve their SUPER FORMS and quite possibly DESTROY OUR SOLAR SYSTEM AS WE KNOW IT Yes the earth may not be their ULTIMATE GOAL but it is OUR HOME AND I WILL NOT LET US BECOME A STEPPING STONE...will YOU Also they are NOT from mars thats a lie the government tells you.....

To fight back against the aliens you need to know when they are among us... Yes its TRUE their appearances can range from FULL FREAK to ALMOST HUMAN Here are some things you should be looking out for